Resilience in all its Forms: Libraries in the Anthropocene

Resilience has multiple meanings and multiple uses across disciplines, and the portability of this term can cause confusion. This is certainly the case for Rory Litwin, who organized a colloquium, Libraries and Archives in the Anthropocene, the weekend of May 13 and 14, 2017. Litwin and other conference organizers, whom I thank for their hard work in putting together a necessary and fascinating weekend of discussion, accepted a panel from Scarlet Galvan, Eamon Tewell, and myself, in which we explore connections between uses of "resilience." We are not the first group of scholars to attempt this. Indeed, the American Library Association's Center for the Future of Libraries notes connections between resilience as a preparation for coming climate, economic, and societal disruptions as well as something that may be asked of individuals.

This crude schematic may shed some light on my thinking.

The Center's webpage for Resilience approvingly cites a National Academies paper on the topic (PDF), quoting "Resilient communities would plan and build in ways that would reduce disaster losses, rather than waiting for a disaster to occur and paying for it afterward," and a Rockerfeller Foundation initiative that defines resilience as "the capacity of individuals, communities, institutions, businesses, and systems within a city to survive, adapt, and grow no matter what kinds of chronic stresses and acute shocks they experience."

I do not view it as a stretch to note that in that first quote the onus is on communities to become resilient and any inability to do so would ultimately be the fault of the community. "Why were you not resilient enough," one might ask following an exogenous shock. The second quote is explicit that people, as individuals, are expected to be resilient in the face of sudden changes. For many workers, capitalism itself is the exogenous shock, an imposition from above that is to be, at best, negotiated and mitigated on unequal terms.

“Libraries may find themselves competing for funding with resilient programs or initiatives, especially in an increasingly limited pool of government spending,” notes the Center. The competition over scarce resources will, as it always has been, be balanced on the back of workers. The rich can escape to New Zealand and ride out a climate apocalypse, while the poor of today are labeled “looters” for surviving hurricanes, or freeze to death or die of carbon monoxide poisoning in “once in a century” weather events that now happen once a decade.

“If organized in advance, and with training in advance, the library can be a center for improving community resilience,” notes The U.S. National Commission on Library and Information Sciences. What is not mentioned is the staffing and funding necessary to prepare. Library workers will be asked to do more with less, as they were during Hurricane Katrina (PDF) in 2005, and to, as Robin James puts it, perform resilience.

Though Litwin and conference organizers accepted our panel, Litwin’s since-deleted twitter account singled out my portion of the presentation in particular, noting resentment over using the “conference as an opportunity to present an unrelated paper that critiqued a central idea in environmentalism by a kind of insinuation of a conceptual connection without spelling one out.” These tweets from the Litwin Books account have been deleted as well. Litwin’s critique of our presentation came to a head during a question and answer period, viewable at about the 1:31:00 mark. 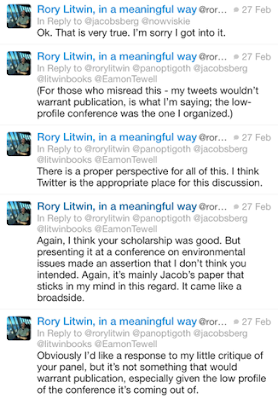 Evidently this answer to Litwin’s question-cum-comment was unsatisfactory, given that three-and-a-half years later it became a topic of debate on social media. None of us owes Litwin a more in-depth response; we produced this scholarship and stand by it. 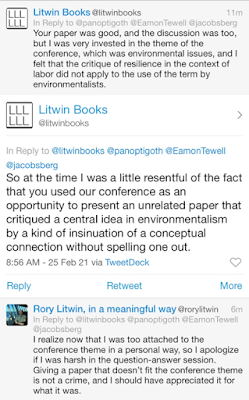 The anthropocene is marked by humans changing a planet, terraforming it with concrete roads, dams, buildings, embattlements, and other structures, as well as altering the planet’s atmosphere through deforestation and greenhouse gas production, among other means. Rising sea levels, changing climates, and increased resource scarcity are some of the products of this epoch. I do not think it is possible to separate what is being asked of communities, to be resilient, from what capital asks of workers. For both, we are to take what is coming, to take reactive measures that are sold to us as proactive ones. The resiliency that communities must show in the face of climate change and other disruptions cannot be separated from the capitalism that has caused these changes and brought about the anthropocene.

Elsewhere on this topic: Academic Libraries and the False Promises of Resiliency and Scarlet’s A short revisiting of resilience.